History of our School

There was a strong tradition of Hedge Schools in the area and they provided the only form of education during the pre-famine and early post-famine era. In 1861, the parish priest of Clara, Rev. James Corcoran, identified a need for a more formal education system for the population of Streamstown. He sent a request to the Commissioners of National Education for aid to build the school. He pointed out that education was being provided by hedge schools of ‘low class’ and that the population was large enough to ensure the viability of a school. Rev. Corcoran was successful in his petition and a new 2 room school was built in the area with two teachers. The new school brought social and educational benefits to the area and led to a significant reduction in illiteracy levels in the area, as indicated in the 1901 Census. However, as all subjects were taught through English it also contributed to the decline of the Irish language in the area.

By 1900 the condition of the school building had deteriorated and it was recommended that a new school be built. The new building was completed in 1902 and is still in use today. The school population increased in recent years leading to the appointment of a third mainstream teacher in 2001 and the addition of a prefabricated building. A third classroom was built in 2011, with further work on the school in 2012.

In Spring 2019 the school was developed further with the construction of a new classroom, a learning support room, a disabled toilet and a new reception area. All work was completed in August 2019. 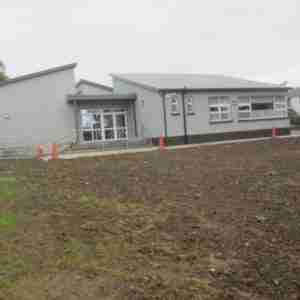